What are Split Gill Mushrooms? Are They Safe?

With over 28,000 different sexes, the schizophyllum commune–or the split gill mushroom–knows how to spread its seed: it’s the most widespread fungus in the world, thriving on every continent. This unusual fungus has the ability to dehydrate and rehydrate itself and the mycelium only has to produce one set of fruiting bodies a year. What are these mysterious mushrooms, and do they provide any benefits? Let’s take a look.

What are split gill mushrooms?

Small and hairy with fan-shaped caps, split gill mushrooms (scientifically known as schizophyllum commune) are easy to spot. They grow in clusters on dead branches, dead or dying trees, and compositing grass.

In the United States, they are mostly found on maple, oak, and elms. They kind of look like shaggy oyster mushrooms, and their gills are called “cleft gills".

Although they’ve been used around the world for medicinal treatments and in food, split gill mushrooms are also lauded for their antitumor and anticancer potential.

Yes! These wonderful mushrooms are edible and have been used in cuisines around the world including in India, Indonesia, and Mexico. However, this edible mushroom isn't for everyone. The texture is extremely tough so it’s not universally appealing. Especially in North America where the texture is especially unique.

Western culture tends to see these mushrooms as not edible due to differing standards of taste and not because of toxicity.

It’s more of a personal preference if you want to consume them, but don’t let that deter you from giving them a try!

Split gill mushrooms are a great option for vegans and vegetarians since their chewy texture is comparable to meat.

What is the nutritional value of split gill mushrooms?

In addition to protein, iron, calcium, phosphorus, and magnesium, split gill mushrooms are an excellent source of dietary fiber.

You can brew split gill mushrooms into a tea, or use them in your next stir fry. Here are a few recipes to try:

Read more and get the full recipe here!

We simply love this recipe we found on Dentist vs Chef.

What are the health benefits of split gill mushrooms?

Whether you’re eating them or consuming them via supplemental methods, split gill mushrooms have several health benefits including potential antimicrobial, antitumor, anticancer, antifungal, and chemoprotective effects that are incredibly powerful.

In a Malaysian study, microorganisms with common bacteria were tested with several pathogenic fungi. The bioactive compounds were extracted from the fruiting bodies, mycelia, and culture mediums which are believed to have antimicrobial, antiviral, anti-inflammatory, hypoglycemic properties, and more. This is believed to be the first study showing split gill mushroom’s antimicrobial benefits. 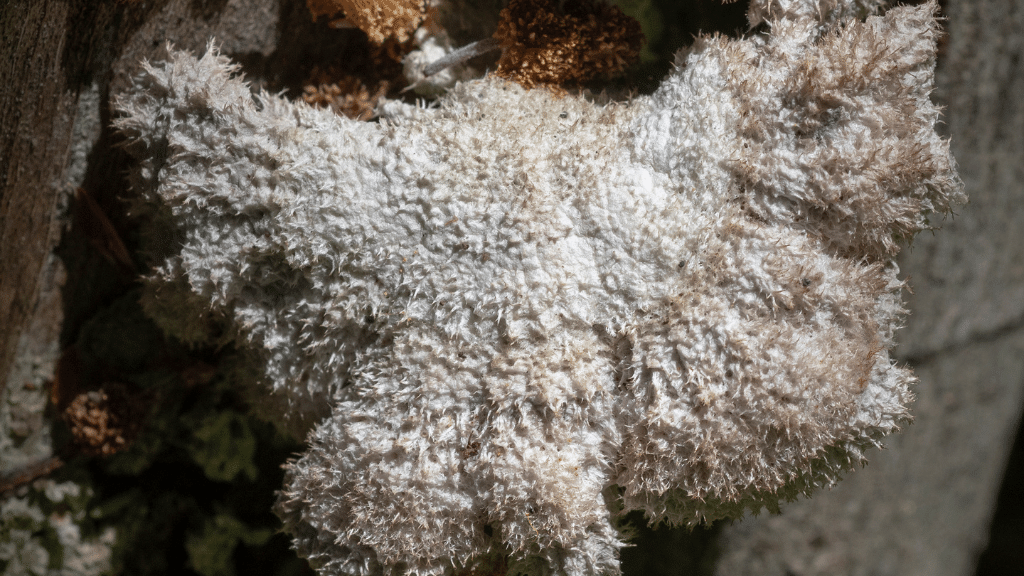 Another study found anticancer and antitumor effects after SPG (schizophyllum commune) was administered via injection. Survival time was increased while tumor growth decreased in the mice that were observed.

NOTE:  The term "SPG" is used in some studies as an abbreviation for split gill mushroom's scientific name which is schizophyllum commune

Mice with bladder cancer were also studied with similar effects with similar results. Even the bone marrow in mice showed protection from split gill mushrooms–after being treated with radio and chemotherapy, their bodies partially protected their bone marrow cells.

Although on a smaller scale, this was also studied with human patients with locally advanced cervical carcinoma, showing that in the 90 patients treated with antitumor polysaccharide sizofiran and radiotherapy fared better and survived longer than the 82 treated with just radiotherapy.

It appears that sizofiran (a drug with extracted schizophyllum commune) is effective in fighting against cervical carcinoma because rapid recovery is stimulated.

In yet another study, SPG was used with immunotherapy in 15 patients with head and neck cancer. In the group treated with SPG, the survival rate after five years was 86.7%, compared to 73.4% in the control group.

Cellular immunity that was damaged by radiation, surgery, and chemotherapy was recovered in the SPG group, showing that this mushroom is more than just a common fungus.

A note on split gill studies

Clinical studies have been performed on both animals and humans, but it’s important to note that the human studies primarily involve an injection containing this mushroom so more research needs to be conducted, as stated in Christopher Hobb’s Medicinal Mushrooms The Essential Guide. This book is an excellent resource for anyone invested in learning more about less common medicinal mushrooms. Learn more and purchase a copy through his site here.

What dosage of split gill mushrooms should I take?

There isn’t much literature to date about benefits via oral administration, but Christopher Hobb's  suggests 6 grams a day of powdered tea extract of split gill mushrooms.

Like other mushroom teas, split gill tea mushroom is rather easy to prepare.

There is a debate (mostly in Western medicine) about the edibility of split gill mushrooms and about their safety for the body. In fact, some researchers suggest that the spores may be an emerging pathogen.

While texture itself may be make-or-break for some, there has been some concern about split gill mushrooms growing inside the human body, among other concerns.

There have been some reports of this fungus sprouting inside humans, but these cases, so far, appear to be extremely rare and tend to involve immunocompromised people who were closely exposed to the fungal spores.

Here's one documented example we found:

"While ingesting crude fungal extracts or fungal compounds does not seem to be a potential health hazard in itself, Schizophyllum commune (and other species, such as Lentinus edodes), are known to cause a variety of health problems in some individuals who inhale the spores. Among the disease conditions caused by the spores of S. commune, the medical literature documents a case of pulmonary infection that disseminated to the brain of a 58-year-old man in Pittsburgh. After weeks of misdiagnosis and mistreatment with immunosuppressing corticosteroids, cultures of lung tissue finally revealed S. commune. However, antibacterial and antifungal agents were of no avail, and the patient died from progressive pulmonary failure and bacterial pneumonia."

Surprisingly, it’s nearly impossible to find commercial products that contain split gill mushrooms despite them being such a common fungi globally.

If you have a local apothecary at hand, they may be able to help create a tincture with locally sourced split gill. 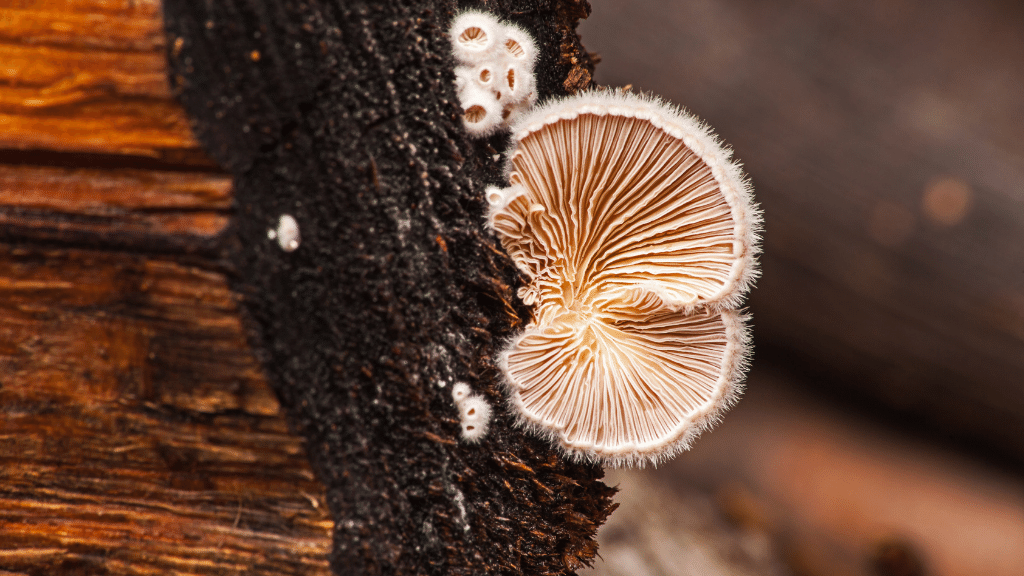 Another option is to go to a specialized market selling split gill mushrooms for you to make your own tincture at home.

Split gill mushrooms are an underutilized and understudied mushroom compared to their purported health benefits. If you're looking for more readily available medicinal mushrooms, why not explore the powerful benefits of reishi, turkey tail, or lion's mane by exploring our blog?

They have several incredible benefits that we can take advantage of, and the research is still ongoing. We’re curious to know your thoughts!

Are you going to use them in your next recipe?