Why You Shouldn't Remove Mushrooms From Potting Soil

You’re lovingly watering your houseplant when all of the sudden you see it: a mushroom!

Or perhaps even a small cluster of them!

Then you start to panic.

In this article we’ll answer all of this and more. Let’s dive in! 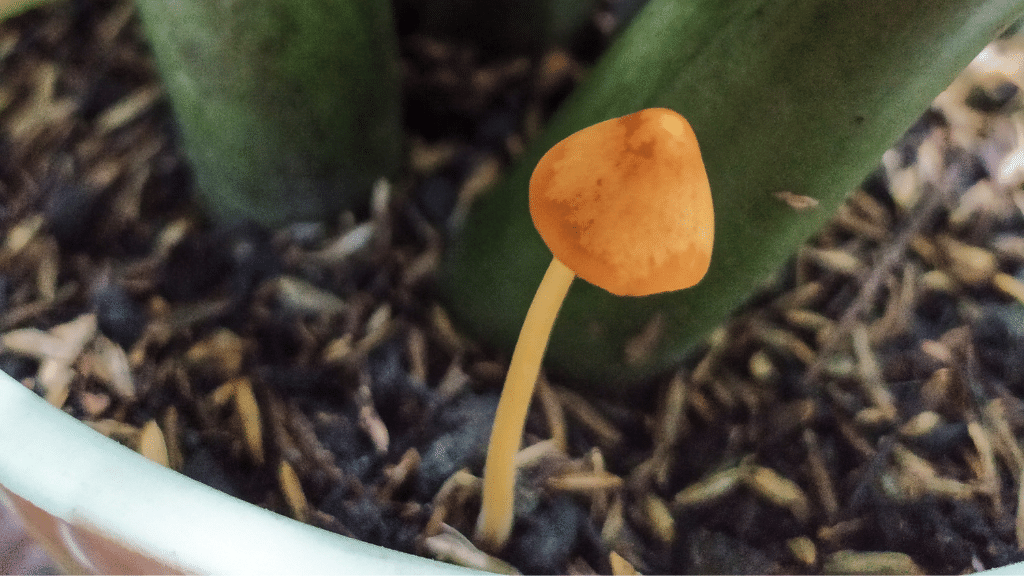 Why are there mushrooms in my potting soil?

The main reason mushrooms are growing in your soil is because mushroom spores were introduced to the soil. This can happen in many ways!

Spores are everywhere all of the time. If they find the perfect environment and moisture level on the perfect day, you could end up with mushrooms in your potting soil!

Understanding how mushrooms grow can help you understand why they’re in your soil.

First, let’s talk about the mushroom itself. In the mushroom-world, the stem and cap you see growing from your plant is called the fruiting body. But contrary to what many believe, mushrooms don’t just appear out of nowhere!

Like plants, mushrooms are supported by a vast and nearly invisible network of root-like cells called mycelium. In order for you to see a mushroom, there must already be a vast and healthy mycelium network in your potting soil.

In other words, what you’re seeing is the mushroom. But removing the mushroom won’t remove the supporting network. That’s why it’s common to see mushrooms come back time and time again in your plants! And it’s often why you’ll see mushrooms growing in the same spots outdoors as well. 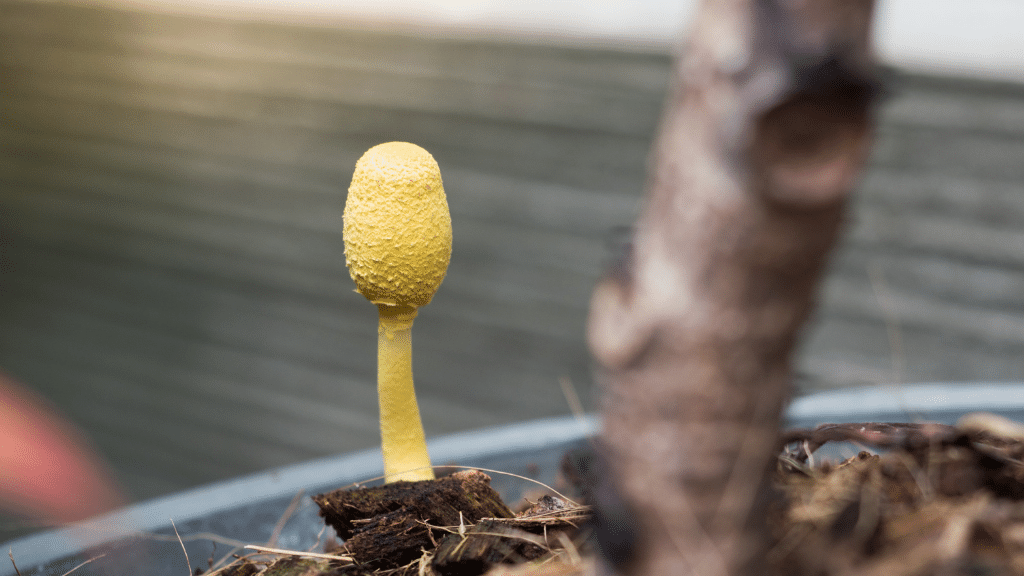 Are mushrooms harming my house plants?

Nope! Not one bit. Mushrooms and houseplants usually form a symbiotic and mutually beneficial relationship with each other. That’s because many of the mushrooms found in potting soil are mycorrhizal mushrooms.

In fact, a scientific study showed that plants grow stronger, taller, and are significantly more disease resistant than those without fungal networks. That’s because fungal networks increase the plant’s biodiversity within the soil itself.

Are mushrooms stealing my plant’s nutrients?

Definitely not. In fact, the opposite is usually happening! Certain mushrooms can also help your plants absorb more nutrients by passing them through the mycelial network to the plants root system.

Plants that are inoculated with mycorrhizal fungi are more likely to grow larger, stronger, and healthier than those without.

That’s why reputable soil companies like Coast of Maine add mycorrhizal fungi to their potting soil and bumper crops!

According to Coast of Maine, they add these fungal networks to the soil for the numerous amounts of benefits to plants.

What are the benefits to mycorrhizal potting soil:

The mushrooms in your houseplant are usually harmless. But if consumed, they may be toxic to you or your pets. It’s best to place the plant somewhere out of reach of young kids and pets who may be interested in the mushrooms.

If you’re particularly concerned, simply pluck the mushrooms from the soil and toss! 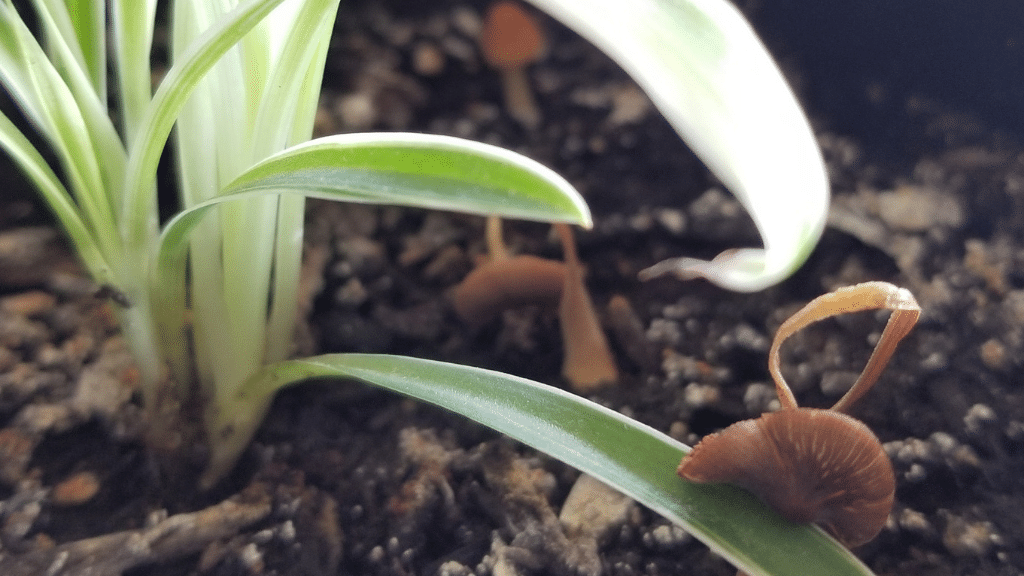 How can I get rid of mushrooms in my potting soil?

The easiest way to get rid of mushrooms is to simply remove them from the plant and throw them away.

Because there's no way to know exactly what species you have in your plant, we recommend wearing gloves or using a paper towel to pluck them out. And be sure to wash your hands afterward.

But like we said earlier, this only removes the fruiting body, and not the mycelial network. Which means that they may come back under the right circumstances. 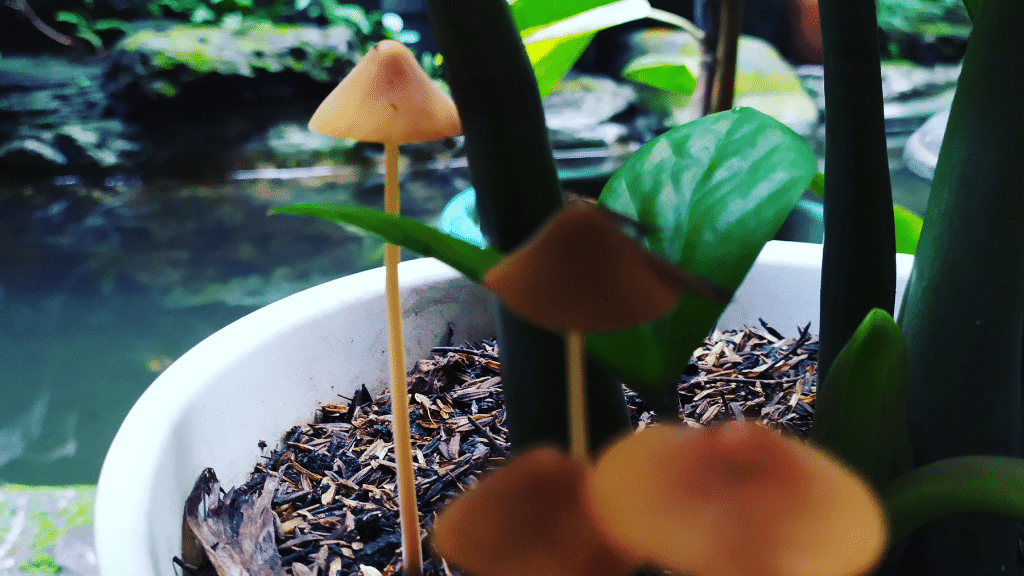 How can I prevent mushrooms from coming back?

It’s really hard to prevent mushrooms from coming back. And you may not even want to prevent them! But if you’re concerned, the best thing to do is regularly remove them as they appear.

Some sources also recommend not over-watering, as mushrooms tend to like a nice warm, moist environment.

Other sources recommend scraping the top layers of soil or replacing the soil altogether. We don’t recommend this approach, as you won’t be able to see the mycelium network, and the mushrooms may come back. So all you’d be doing is disturbing the plant’s soil unnecessarily.

Still some other sources recommend dumping fungicide on your plants to kill the fungus. We do not recommend this approach either. As we’ve stated, mushrooms in your plants are not only safe, but they may be beneficial to your plant’s health and longevity.

Save the fungicide for other fungal issues like powdery mildew.

In summary: leave your mushrooms!

And rejoice! Your house plant is growing an internal and biodiverse ecosystem within its container. Sometimes it's best to not interfere with nature. Mushrooms and plants have lived in tandem with each other for longer than we know. 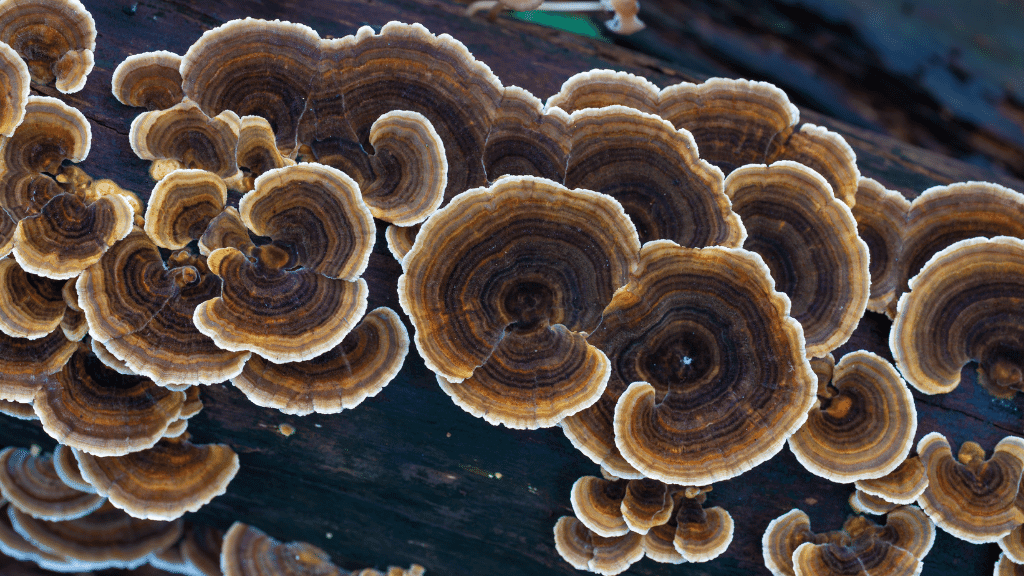 Turkey Tail Mushroom For Cancer in Dogs: The Truth About This Controversial Cure