With the interest in and use of medicinal mushrooms exploding over the last few years in the United States, the need for education on what a medicinal mushroom product consists of is a necessary topic of interest for anyone looking to dive into this world.

In this article, we’ll cover the anatomical features found in the most popular mushroom species, as well as the general life cycle of a mushroom.

No two mushrooms are alike

There are hundreds of types of mushrooms on planet earth, and each has its own unique aesthetic and distinguishing features. It would take days to dissect the anatomy of each individual mushroom species, so instead, we’re going to take a bird’s eye view today.

If you’d like specific information on various types of medicinal mushrooms, we recommend you take a look at our blog - we have a lot of information to explore on there from reishi, to maitake, chaga, turkey tail, lion's mane, and more!

The goal for all of this information? We hope that, as you consider purchasing medicinal mushroom products, you take the time to understand which parts of the mushroom are used in the product and brand you are trusting with your business. With all of this in mind, let’s take a closer look at mushroom anatomy.

(If you're wondering what any of those science-y words are that we just mentioned, check out our Mushrooms 101 blog to learn the basic terminology, and then come back here to keep reading.)

What we see of a mushroom above ground is just the beginning of this impressive organism. Think of it as an iceberg - you can see some of the ice above the water’s surface, but you know there’s a much bigger body of ice underneath that you can’t see.

What’s beneath the surface is called mycelium and what we see above ground is the fruiting body. We go into detail about the differences here. 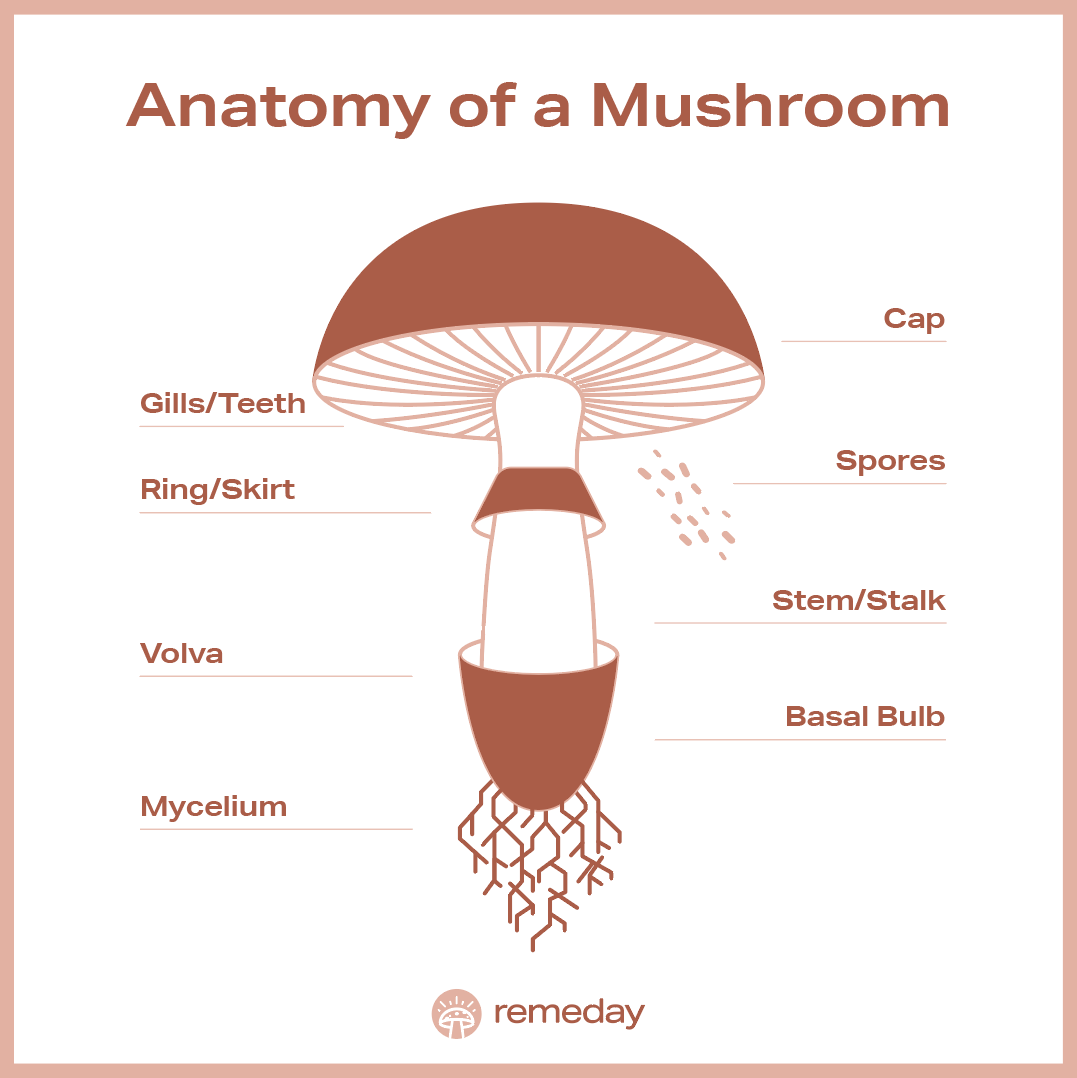 Before we get too far into the weeds with these new terms, we’ll start with the two commonly known features - caps and stalks - and then expand into some descriptions of mushroom margins, tubes, gills, rings, volva, a base, spores, and mycelium. 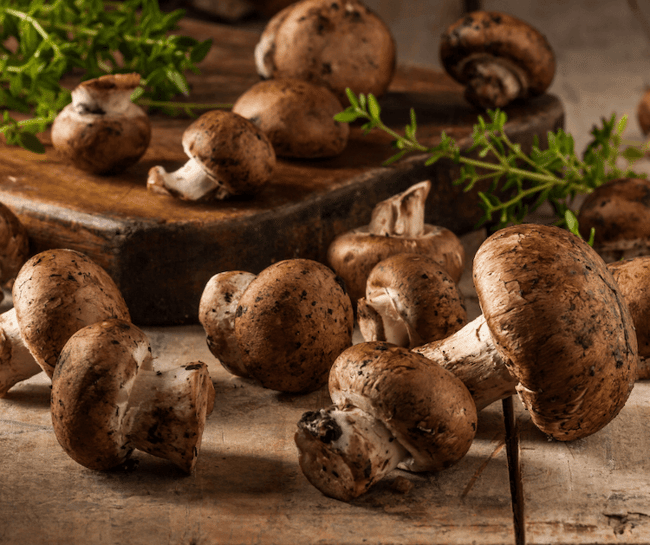 A mushroom cap, also known as a pileus, is a spherical hat that sits on the top of a stalk and protects key parts of the mushroom. Many people think it looks like an umbrella, but mushroom caps can actually come in numerous shapes, including bell-shaped, conical, convex, depressed, flat, offset, infundibuliform, ovate, umbilicate, and umbonate. The gills, which we’ll get to in a second, typically live on the underside of mushroom cap.

Certain mushroom species have distinct looking caps - for example: a turkey tail mushroom’s cap looks like it has petals or repeating lines of coral, whereas a lion’s mane mushroom cap looks like a mop head or long teeth, as many say.

The cap is part of the fruiting body of a mushroom that can be seen above ground.

Next we have the stalk, also known as a stem or stipe, which lives below the cap of a mushroom. The stalk not only supports the mushroom cap, but is also used to help positively identify the species of mushroom at times. In order to positively identify a species, it’s recommended to not cut a mushroom mid-stalk, but instead keep the stalk in its full form.

Not all mushrooms have stalks, but many do. The stalk is also considered part of the mushroom fruiting body seen above ground.

Now we’re digging into some newer terms - or at least they were new to us when we first started getting to know mushrooms more. The mushroom margin, also known as the mushroom edge, is quite simply the edge of the cap. 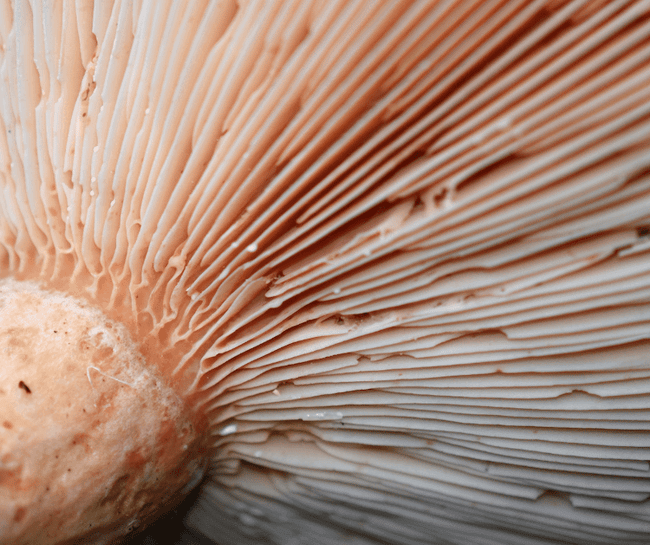 Some mushroom species, like reishi and turkey tail for example, do not have traditional gills or a traditional cap/stalk makeup. Instead, these types of species have pores that act very similarly to gills, but do not look quite the same. 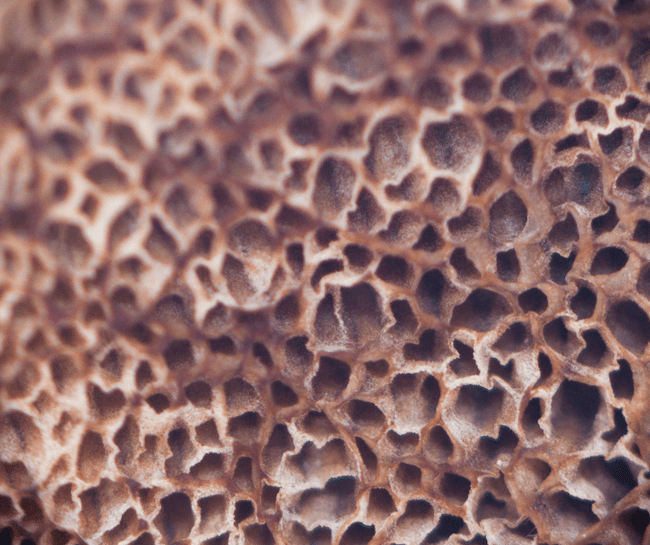 Instead of having gills on the underside of a cap or on the fruiting body, some mushroom species have a layer of tubes that serve as the house of reproduction for the mushroom. Spores come from the tubes in the same way they come from gills or pores.

So, with all of this talk of reproduction and spores, you might be curious what a spore actually does? We’re so glad you asked… 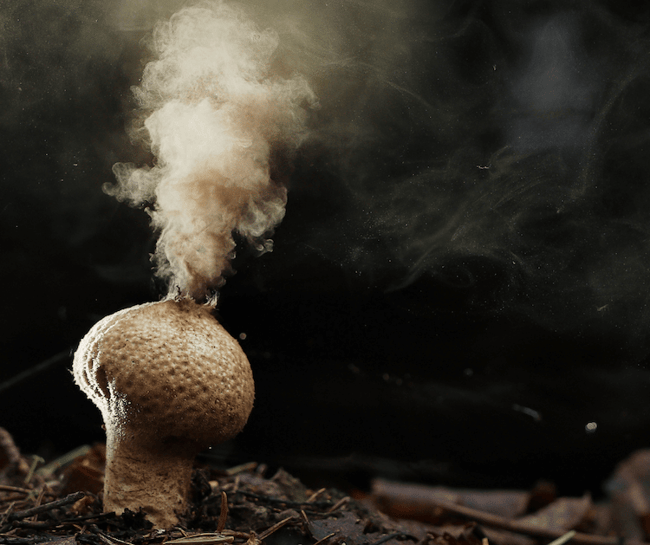 Just like any living organism reproduces, so do mushrooms! Their seed is known as “spores” that are released from the gills or pores of mushrooms in large amounts each day. Once they’re released, they float around in the air, waiting to find the right place to germinate. What makes spores so interesting is that they contain all the necessary materials to form a new fungus type on its own.

Once a spore has settled, it will begin sending out hyphae - little filaments - to help establish the fungus and gather food so it can grow. After some time, the hyphae of another mushroom will meet with the hyphae the spore sends out and reproduction begins. What will come from that? Another mushroom fruiting body!

The ring, also known as the skirt, of a mushroom is a soft membrane that forms around part of the stem underneath the fruiting body cap. Only certain mushroom species have a ring. A ring is left over from a 'partial veil' that once covered the mushroom's gills to protect them. As the mushroom matures over time, the veil breaks down and reveals the gills, thus leaving behind tissue on the stem which is then referred to as the ring. 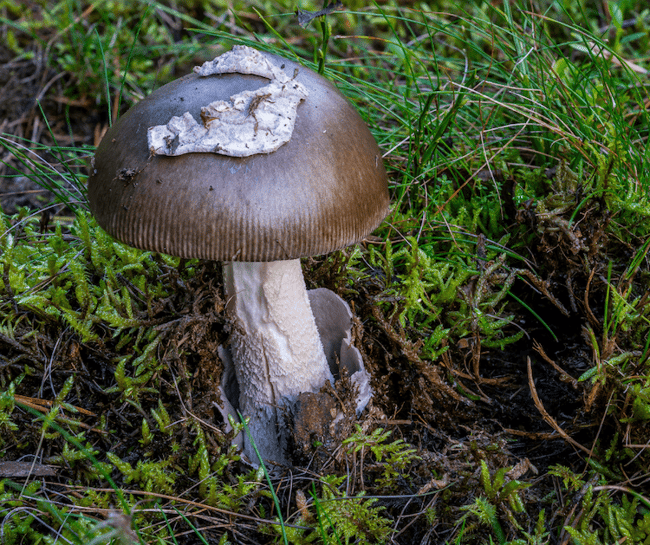 As a fruiting body matures over time, it eventually can protect itself, but at first, there is a veil that protects the egg so it can grow appropriately. As the egg expands, the universal veil eventually ruptures and may remain as a cup-like structure called the volva. The volva appears at the bottom of the mushroom stalk. The volva is the remaining part of the veil that breaks down over time. Not all mushrooms have a universal veil that protects the egg as it grows into a mature fruiting body, so therefore, not all mushrooms will have a volva. 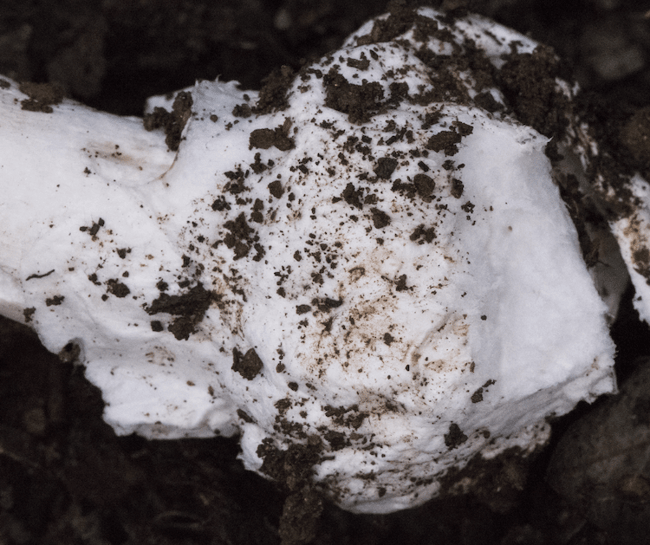 The base, or bulb, of a mushroom is what the hyphae egg initially grows out of. It resembles a broken egg structure that resides at the bottom of a mature fruiting body stalk. Similar to volva, not all mushrooms have a universal veil that grows out of the egg and therefore the base or bulb will not appear on all species of mushrooms. 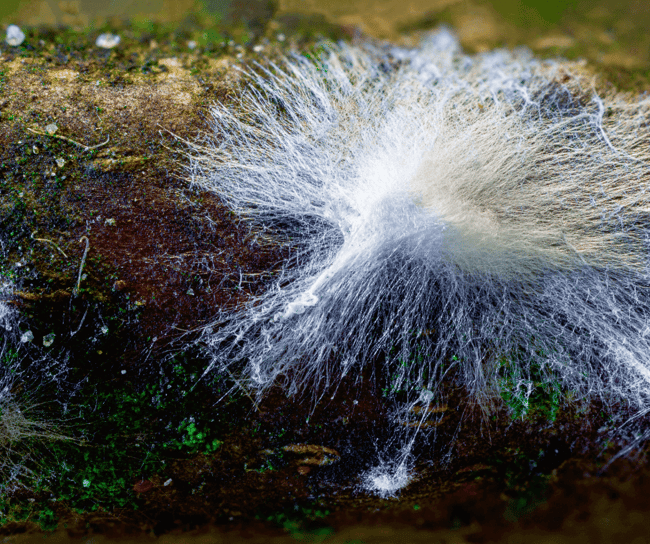 Last, but certainly not least, we have mycelium. Mycelium is a collection of thread-like hyphae that live underground and serve as the vegetative part of the mushroom. Many say it resembles a bunch of wispy branches.

Many argue about whether the fruiting body or mycelium is the most beneficial part of the mushroom to reap true health benefits. Many companies say you should use both. But what's truly better for you?

We’re not here to agree with one side or another, but we do have a blog post on the topic as a whole. Take a look at that if you’re interested in this common-held debate that’s had across the medicinal mushroom community.

As we mentioned earlier, the gills/pores/tubes hold spores that are the lifeline to creating more mushrooms. Each day, a mushroom will release spores into the air. Once the spore finds a place it likes (e.gf., soft forest soil) it will start to send out hyphae to gather food so the spore can thrive. If the hyphae of one spore meets up with another spore, it begins the reproductive process to create a new fruiting body. The two hyphae first start that process by creating a complex mycelium underground. If the reproductive process is successful, an egg/button will eventually form above ground.

Curious to learn more about mushrooms, their health benefits, and more? Check out the Remeday blog for mush, mush more on this interesting species. Thanks for stopping by! 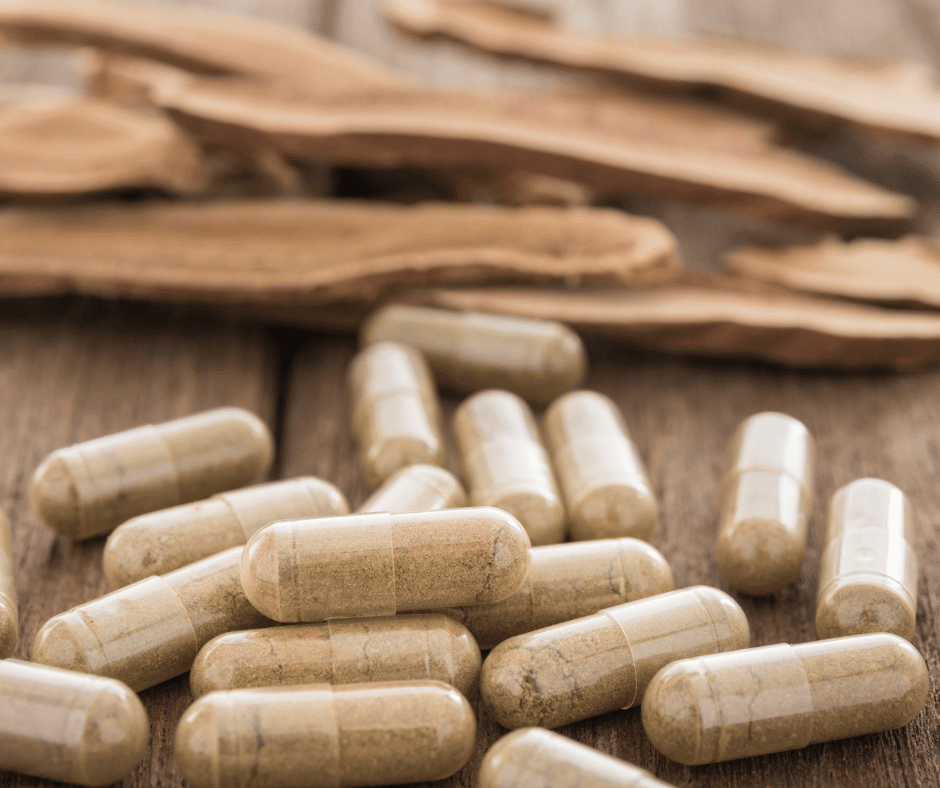 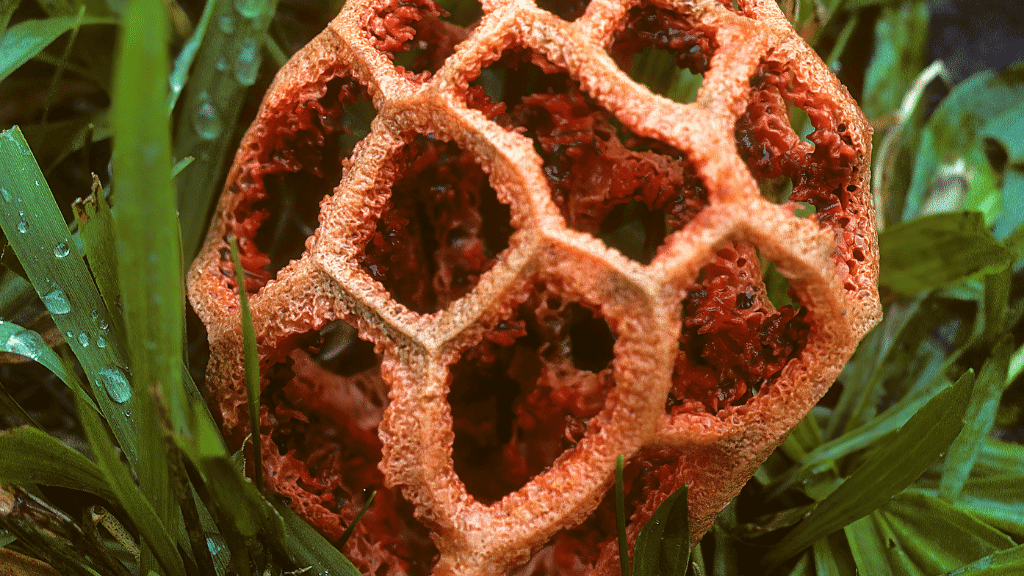 23 of the Weirdest Looking Mushrooms You've Ever Seen