The easiest way to identify wild magic mushrooms quickly and easily, without needing any special equipment, is to know what their physical characteristics are.

Unfortunately, there are several types of magic mushrooms that look very similar in appearance to non-magic and even poisonous varieties.

We cannot stress enough the importance of working with a guide or mycologist to identify wild mushroom species. Otherwise, you could end up consuming poisonous or inedible mushroom species instead.

In this guide, we'll cover some of the physical characteristics and measurements of wild magic mushrooms to help you identify what you're seeing on your travels!

But first, let's cover some of the basics.

What are magic mushrooms?

While it may sound funny, magic mushrooms are a powerful medicinal fungus that have the potential to greatly benefit many people. Not just from an experience perspective - although many cultures have enjoyed the occasional 'trip' for centuries.

But magic mushrooms also represent a medicinal opportunity for those struggling with a variety of mental health disorders including anxiety, depression, PTSD, and more.

You can read more about the potential health benefits of psilocybin and magic mushrooms here.

Called 'magic' for a reason, magic mushrooms - or shrooms as they're commonly called - contain psilocybin – an essential compound that creates hallucinogenic and conscious altering experiences when consumed.

However, some species contain more or less psilocybin than others. Furthermore, while some types of shrooms have similar physical features they can be differentiated based on their size and coloration as well as growing locations (including the soil or substrate used to grow them).

Read on if you have any interest in learning more about and identifying psilocybin mushrooms. We've also included a short video at the end of our post for those who want to get started right away!

Where do you find magic mushrooms?

Magic mushrooms grow in many parts of North America. Look for them on your next hike in a state park, or search for gilled mushrooms under fallen trees in your own backyard.

The best time of year to identify psilocybe cubensis and other magic mushroom varieties is in late summer and early fall. In any case, you can find magic mushrooms with ease as long as you know what they look like!

Here are some tips for foraging for magic mushrooms:

It’s best to not try identifying any mushroom by yourself; if you think you might have found one, take it to an expert for verification before eating it.

It's also important to remember that consuming hallucinogenic mushrooms can be dangerous (and illegal) if you don't know what you're doing.

Consult with experts before consuming any kind of wild mushroom!

Psilocybe cubensis is one of the most popular strains of magic mushrooms.

They can be identified by its conical cap, which grows up to 2 inches in diameter. The cap is usually a dark brown color and has a wavy margin. It also bruises blue when touched or handled roughly.

The gills of psilocybe cubensis are white, and they run down the stem of the mushroom for about half an inch. The stem itself is white or yellowish in color, and it's between 1/4-1/2 inches thick.

A psilocybe cubensis mushroom will grow up to 4 inches tall with a stalk that's 3-5 inches long.

When you're picking magic mushrooms, it's important not to pick any that have been damaged or appear moldy or rotten.

After you've found your psilocybe cubensis mushrooms, you'll want to make sure they're still fresh.

Gently pull up on one of their stems. If it comes out easily, it's not quite ready yet. Wait another week or two and then try again.

When you're ready to pick your mushrooms, cut off their stems with a sharp knife or scissors, leaving about an inch of stem on each cap. Put them in a paper bag or container and store them in your refrigerator until you're ready to use them.

Don't wash your magic mushrooms! They'll rot if they get too wet. Learn more about how to store your shrooms in this complete guide.

We've compiled physical characteristics and photographs of each mushroom type to help you on your identification journey.

1. What is Psilocybe semilanceata?

Psilocybe semilanceata, also known as liberty cap, is a variety of hallucinogenic mushroom that grows throughout Europe and North America. They're especially common in Washington and Oregon state. 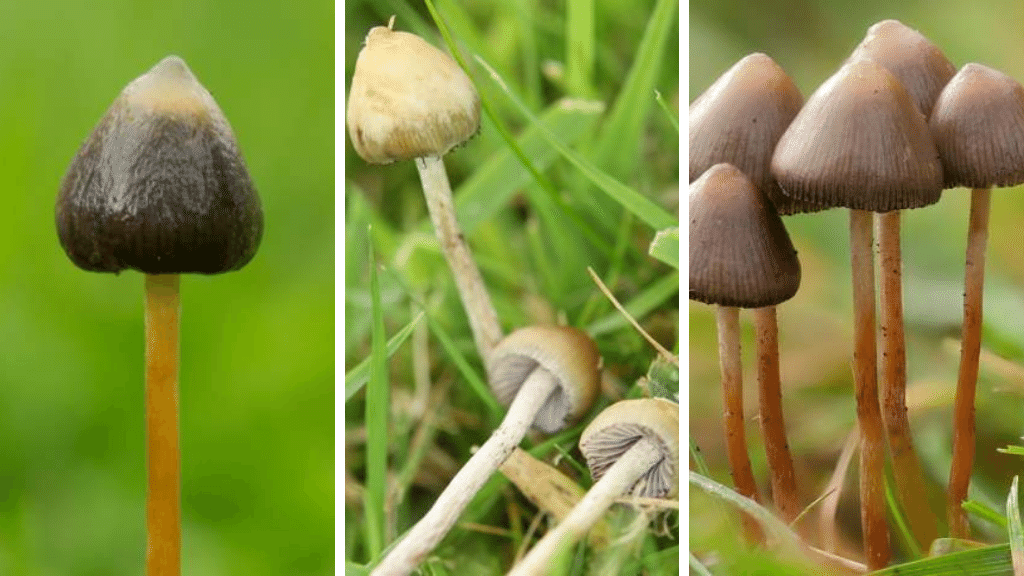 It typically has an oblong-shaped cap (2-6 cm) with an umbo (convex boss), although there are variations in color. The gills on the underside of its cap are initially yellowish before turning brownish purple when mature.

In addition to identifying Psilocybe semilanceata by physical characteristics, you can also look for other telltale signs:

DID YOU KNOW? This mushroom got the nickname "liberty cap" because they were thought to have been worn by ancient Greek warriors during rituals; and/or it’s said that consuming these mushrooms may result in auditory hallucinations.

The psilocybin content in liberty caps is relatively low, but these mushrooms have gained popularity in recent years because they’re easy to identify and produce a milder 'trip' than some of their psychedelic counterparts.

Learn more about liberty cap identification with these quick links:

2. What is Copelandia cyanescens?

Copelandia cyanescens is a species of psilocybin mushroom that contains psilocybin and psilocin.

The levels of psilocybin tend to be fairly potent, depending on the growing conditions, particular strain, and medium. In other words, less is more for this powerful magic mushroom.

The mushroom has an umbrella-shaped cap with long pointed edges, and it bruises blue when handled or injured. Copelandia cyanescens is found in Colombia, Japan, Jamaica, Australia, Brazil and Papua New Guinea. It is also known as Blue meanies or blue angels in Australia. This mushroom has been consumed for more than 3,000 years!

The cap of Copelandia cyanescens is 2.5–10 cm (1–4 in) wide, and initially conical before expanding to convex, broadly convex, or nearly flat in maturity; occasionally with an umbo. The cap surface is smooth, sticky when moist, and more or less shiny; brownish orange to yellow-brown in color. The cap margin is initially curved inward before straightening out in maturity.

The crowded gills are adnate to sinuate, sometimes by a tooth, and have a whitish to light pink color when young that darkens with age.

The stipe measures 4–12 cm (1.6–4.7 in) long by 0.3–0.8 cm thick, and is equal in width throughout its length or slightly thicker at the base; it has white mycelium at its base that stains bluish where damaged.

Learn more about blue meanies identification with these quick links:

Gymnopilus luteofolius is a hallucinogenic mushroom found in Florida, Georgia, and parts of California. It is similar in appearance to other psilocybin mushrooms but does not contain psilocybin or psilocin. Notwithstanding, this mushroom is still purported to have mild hallucinogenic effects. 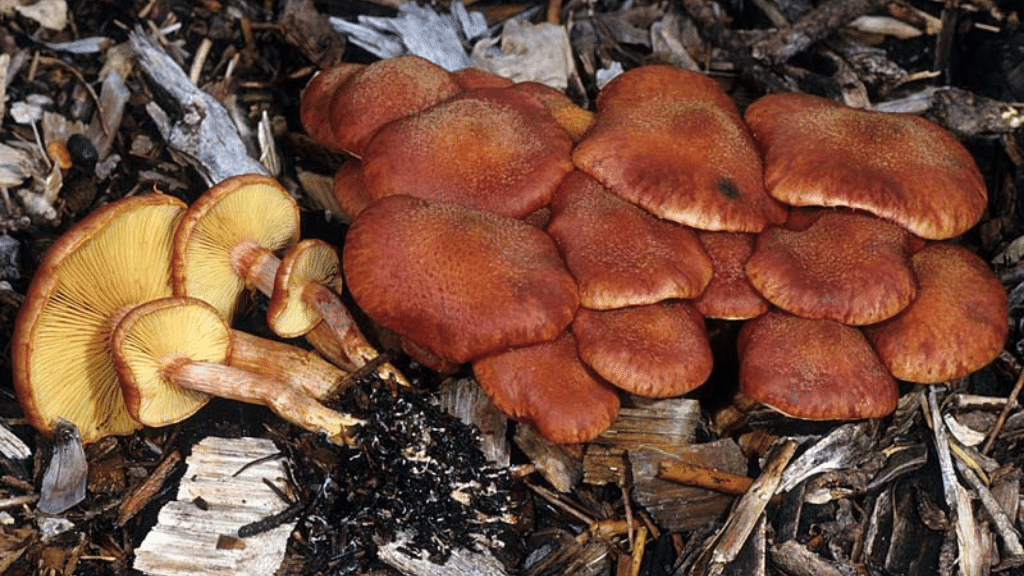 There is no psilocin or psilocybin in G. luteofolius, but there is baeocystin and norbaeocystin. These chemicals can have similar effects as psilocin and psilocybin, but they are not considered to be hallucinogenic.

Gymnopilus luteofolius is considered by some mycologists, including Paul Stamets, to be a good edible species that can be used as an alternative to Psilocybe cubensis, which are often hard to come by.

Gymnopilus luteofolius is a medium-sized mushroom that grows in clusters. It has a brown cap that fades with age, and its gills are white or yellowish when young. The stem is white or yellowish, and it does not bruise blue. The spore print is usually rusty-brown.

Learn more about how to identify Gymnopilus luteofolius mushrooms with these quick links:

4. What is Psilocybe azurescens

This is a very potent type of wild magic mushroom. While some sources state that it was first discovered by a troop of boy scouts, many others attribute Paul Stamets to publishing its potency and raising it to general awareness.

Psilocybe azurescens is most commonly found in California and Oregon. The cap of Psilocybe azurescens measures between 3–10 cm (1.2–3.9 in) in diameter and is usually conic to convex, expanding to broadly convex and eventually flattening with age with a pronounced.

This magic mushroom can be chestnut to ochraceous brown to caramel in color, but bruises blue and can have bluish-black zones. Its gills are usually brown but can be stained into black when the mushroom is bruised or injured. It has two tiers of lamellule and the edges tend to be white.

You might also hear these mushrooms called blue angels, blue runners, or most popularly - flying saucers!

Learn more about how to identify blue angels/flying saucers here:

We hope you found this guide helpful!

Check out our state-by-state psilocybin legality database for the latest legislation on psychedelic mushrooms. 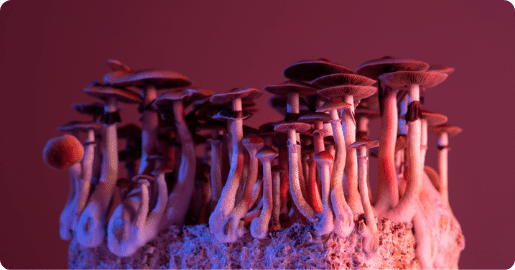 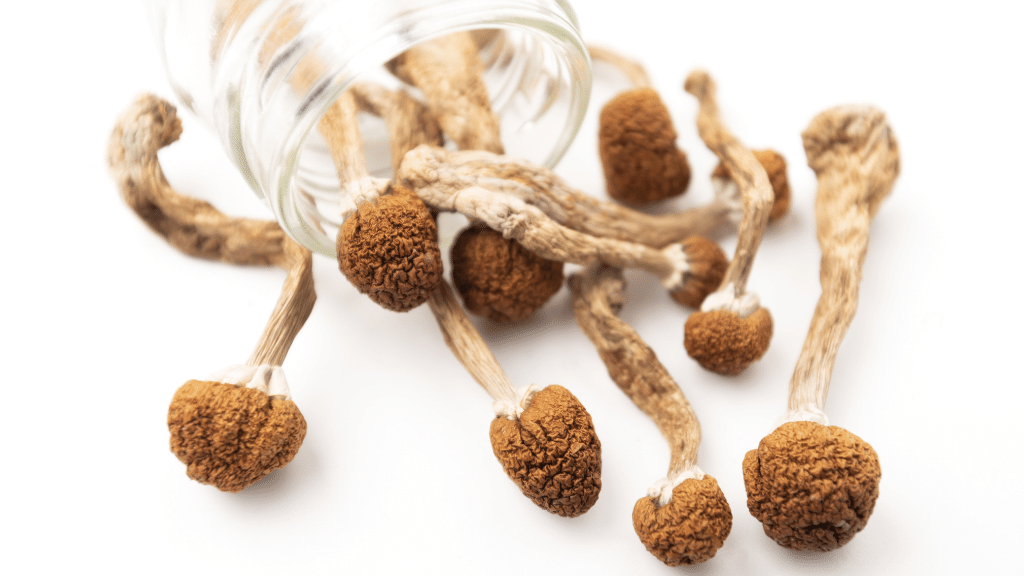 Psilocybin vs Psilocin: An Easy Guide to These Psychedelic Compounds